A downloadable game for Windows, macOS, and Linux

The sequel to my first game Liar Liar : Liar Liar 2: Pants on Fire

Continues one year after the game left off, Yukari and Miho are now high schoolers, who are now dating and spend their leisure time together holding hands, kissing, and murdering the occasional boy or two. On one day just like any other, a new transfer student arrives to Yukari's school. It's Koshi Tanaka! But wasn't he dead? Apparently not. The goal of the game is to figure out the mysterious circumstances of Tanaka's revival and most importantly, staying alive.

Trigger Warnings: Blood and Gore (an example of one depicted above), Violence (a majority of it is implied, but include, forced amputation, implied torture, throat slashing, and stabbing) mentions of stalking, eye strain (like the first game it is fairly bright), sudden noises and the screen shakes occasionally

I worked on this with a strict deadline of a week as opposed to five days this time, and I'm proud to say it's much longer. The true route should take you around 20-30 minutes to complete! Unfortunately, the story is pretty predictable (and cheesy too haha) and quite linear, there are probably a bunch of things left unexplained and a lot of stuff I wanted to include (that didn't make the final cut) I have learned my lesson I will probably write out the script instead of making stuff up as I go next time haha. I hope you guys have as much fun playing it as I had fun making it!

It's a cute game definitely worth playing, but the true ending was so anticlimactic. It was so short that it felt like nothing had been resolved AT ALL, it was just like all the bad endings. Super disappointing, like no prologue or ANYTHING.

finally got the true ending after so many tries aaaa

i dont get it

yea this one is pretty kek too

How do you get the good ending?? I feel like I've tried everything.

tohru was in the- OMG BRUX,FKJFSKHHNFD WHAT ABOUT THAT OTHER DUDE- IS THERE GONNA BE A PART 3 WITH HIM (its a character from the boy in liar liar 1 who was stalking miho, he has his own game)

What is the game for the stalker?

Blood Idol Wakabayashi. It's a spinoff though, so hope you weren't expecting anything serious mea cara :/

hey, i dont have knowledge about downloading games from this site, can someone teach me how to run this game??? pleasee

so after you download the game you right click the zip and you click extract here (before extract you can put the zip in a file if you dont wan a mess ) then you just find the game and click it and enjoy , sorry bad english :V

is there a good ending ? i keep getting bad ones

I haven't gotten one ether just the normal one

there is 1 good ending! i've gotten it

yes. there is a good ending

i loved this! i hope a third game will come soon!

I would really love seeing the creator making a third game! i think the creator honestly really should make a third game cause i have seen that many people really like Liar Liar ❤😊

I'm really confused. I played the demo and there was so much more content. The art was updated and very clean, but now it seems like... There's much less content. There are less endings and choices. It's like the story got cut short... Is the demo newer than this version?

"Hey y'all, the demo's out, new and brand spankin' new Liar Liar 2 completely remastered, new sprites, backgrounds, story lines" That what it says on the Liar Liar 2 demo version, so i guess the titles got mixed up or something and the demo is new

actually, no. the newer version is called demo because it's a second version/recreation of this game but it's incomplete. because this wasn't written well, the creator decided to recreate it; therefore giving us an incomplete version until they finished it.

however, after a few years, unfortunately the creator isn't interested in this world or it's characters anymore, so they won't be continuing the second version of the game. but, to make up to this, they'll post the rest of the plot in the Liar Liar wiki with the help of a friend, as well as some more information and unanswered questions about the characters.

i was really sad when i read the post because i've known Liar Liar for a few years now, even before the demo of the second version was released, and i'm once again in the Liar Liar fandom currently. but, hey, at least we'll get to know what the rest of the game was meant to be, as well as more info!

I like how there is no good ending lol

Hi! I just played the first game tonight and id really love to play the 2nd!! But..no matter what i do it won't run on my computer. The first game ran with no issues.. and I'm wondering of anyone knows how to help me out so i can play the second one! I have windows 10 and i did the same process i did to run the first game. But it didnt work. Please help!

Nevermind im dumb i figured it out

How? i've been having the same problem, the game just won't open and idk what's wrong bc the first also ran properly :(

lmaoo, that's some engineering right there

that game was my first visual novel!! i wuw it so much

You didn't play the first one?

is there is any good ending

super fun to play! i love all the characters and i loved getting all the cool endings

Got all the endings, super fun! I personally like Tohru and I hate Akira. Lol that's all ok bye

jeEZUS it took foreverrr to got the true ending, real sad. (no spoilers ;9)

I tried the first one year ago and today I decided to play the second. IMPRESSED!

Again I made a video (in Spanish): [https://bit.ly/LiarLiar2IX7] I hope you enjoy it and have a good afternoon!

the game was really good! I think there are scenes I haven't seen but im still playing the game, but overall, its a good game! love it <3

Hey, i like your game and i want our people play this game with our language?

What do you think?

Can i translate this game my language?

I made a video on the first one. Had to do the second one. I like the first one better admittidly but this one gave a much needed ending and focused more on the side characters. So I apperciated that aspect.

Doe's anyone know where all the content in the demo are? Or is the demo a revamped verison of 2 but missing the entire thing?

If you're only finding a few endings, remember to save at each end and at each desicion. Play it through a couple times. Really fun story, I can't wait for Netflix to produce the anime.

Lol. I don't think there will be an anime.

Played the first one, and found it to be a bit too short. So, I wanted to see what the second game had to offer, And I have gotta say, this series had me hooked! I'm a sucker for choice driven games, and this one has many more choices and endings. This one had me struggling around choices to get the true end, and I loved every twisted second of it! This is a huge step up from the last game and it shows that you put more into developing the story and how choices play out. I hope you intend on keeping up with this project!

Hey, I'm just curious on which program you used to make this. I love the game, it's absolutely fantastic!

This is made with Ren'Py, a free and easy Python-based Visual Novel Engine. Check it out here: https://www.renpy.org/

Now this is something. I would recommend anyone who's scrolling down the comments, after playing the first game ofc. It's very enjoyable and twisted. Can be confused at times but you'll figured out soon enough how to get the true ending. If you really want to know how to get one u can search it up or just scroll down the comments bc there's somewhere there u can find out. I've really enjoyed this

After Years of hardwork (( JK )), I finally think I was able to gain most of the Endings. If Liar Liar 3 ever went out, I'd gladly play it <3

Are you ever planning on making a part three?

"How not to act as a human"-Simulator

There needs to be another excamation: ALL ACTIONS AND REASONING IN THIS GAME IS NOT RELATED IN ANY WAY TO REAL LIFE MORALITY!

AAHHHH ITS SO GOOD !

The endings are all so unexspected! It took me a while to actaully get to the true ending, and the art is really well drawn too. I love everything about this game~

Been playing the series on my channel and I'm having a blast with this!

THERE ARE SO MANY ENDINGS!!! AND I NEED MORE!! THIS IS THE STORIES I LOVE!! YANDERES!!! PLS MAKE MOREEEE i wish i know how to do splashed blood on my animes...;v;

This is sad I love the charaters and Yukari but I like the game!

This sequel feels like a polished, longer, and more intricate/detailed version of the first game-while also managing to continue the storyline from the first game. It got genuinely creepy & serious, while having the sillier vibe of the previous game.

I seriously lost track of time playing this; I wanted to explore every possible ending involved-and every character interaction.

Awesome game! I'd recommend this to anyone who enjoy creepy games, choose your own adventure stories/mysteries, or anime fans!

Good game. Waiting for the third~~ 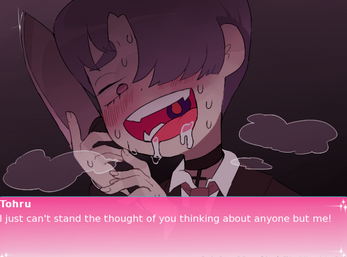 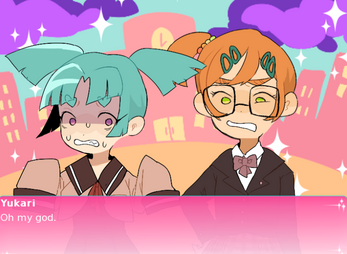 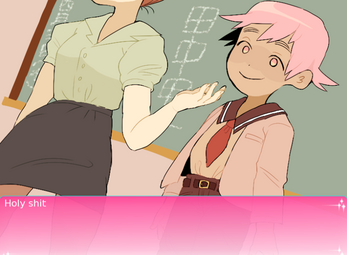 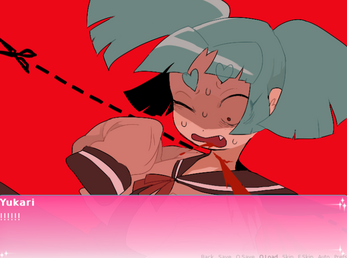